Predictably on the tails of my last entry, and because I am British, I’m going to moan about Winter. I live in Western Pennsylvania, and while it’s hardly Minnesota, it’s a somewhat harsher experience than my British homeland. The average January high for Pittsburgh is 37°F(US Climate Data, 2016); that is the average low temperature for January in my old hometown on England’s South coast(Met Office,2014).

The stats don’t tell the full story – it may be viciously cold when the sun goes down, but it’s usually tolerable for the morning commute, and crucially, usually quite dry, so there’s no frost to worry about, and a little less risk from ice.

What got me thinking about this is the last two days have seen cooler than average temperatures for my morning commute, around 50°F. I had to break out my waterproof mesh jacket liner (it traps heat), my Oxford neck warmer, and switch my Winter gloves for my thirteen-mile commute to work. I started to get that characteristic slight fogging of my face shield around the pinlock that the cold air causes.

There’s still a good four, maybe six weeks of good riding left for the normies; after that, the bikes get prepped for winter and put away, perhaps breaking them out on the odd sunny day, but generally, that’s it until April.

Last October 19th, the morning temperature dropped to an unusually low 29°F. It would be the first time I had ridden in temperatures below freezing.

It was a rude awakening. The three mile stint on the highway caused my fingers to become, well, not quite numb, but extraordinarily painful. The wind blast forced its way past the gasket in my face shield, and hurt my eyes. My kneecaps hurt. I had real difficulty warming my gloved hands up again, and resorted to pressing them on the clutch and stator cover at traffic lights, which possibly gave the appearance I was attempting to mate with my bike.

I’d received a hard practical lesson in windchill, the theory of which I was only vaguely aware – this table tells the simple story, and it doesn’t even show figures above sixty mph.

I was a bit despondent as I’d already bought some expensive winter gloves, but I now knew with certainty they wouldn’t be enough. The problem was the highway. I’d need something heated, either grips on the bike, or my gloves, but that’s another blog entry…

The weather’s still pretty damn good. Just a few weeks back I was out riding thinking I didn’t have much Summer left. A short fifty-miler today before the weekly commute grind.

Washed the bike observing the usual Sisyphean practice. It’s due to rain tomorrow.

This could have gone very badly, luckily nobody was hurt and nothing was damaged.

In fact I was confused, as I thought for moment I was going to get pulled over, especially at the top of the street when the vehicle stopped for no obvious reason a few feet in front of me. I fully expected the blue lights to come on.

In this part of the world, test riding bikes isn’t easy. The bar to a ‘M’ endorsement is low, and there are no restrictions. A novice rider can get their learner’s permit and hop on a 180hp, 1000cc bike the same day. Yes, they’ll probably hurt themselves. There’s a good example of this from Laurie Jennifer’s Youtube Channel:

I’m assuming – though I am not certain – this is the reason most dealers do not offer test rides; An absurdity given that you might be spending North of ten-thousand dollars. However, manufacturers do run demonstration days where they will rock up in a trailer full of $CURRENT_YEAR models and let you have a ride around in a group. It’s better than nothing, but be sceptical of ‘reviews’ on YouTube (and fuck me, there are loads) based on these rides; they’re simply not long enough for anyone to really learn much about a bike.

Back in July, Ducati ran one of these demo weekends at a local dealership. I’ve never been particularly interested in the brand; the fierce ownership cost and tricky servicing is quite enough to put me off, they are however extraordinarily beautiful bikes, and I definitely wanted to ride their 959 Panigale supersport.

On their booking sheet I’d chosen the Panigale and the naked Monster 1200, as these were the categories I was interested in.  The supersport/superbike class is highly aspirational among novice sport bike riders, and there’s considerable debate in their suitability for the street for they are – to use the formal classification – stupidly fucking fast. The first time on a supersport is lightheartedly seen as a rite of passage for the new rider, i.e. me. The stereotype is well covered in this video…

I, however, am too old for the hype. I just wanted to ride it and see what it was like. I knew it would be quick; it possesses around four times the power of my Ninja 300, and weighs only a little more. Frankly I wasn’t particularly intimidated by it; I had around 9000 miles under my belt at this point and wasn’t worried about riding it; ultimately, it’s just another bike, but jeepers, look at that thing.

Hopping on, the bike immediately felt very light; similar to my own. The supersport seating position is awkward – your feet are back and high, and you feel like you’re on all fours looking over the front wheel. It’s no doubt exacerbated by my height, most of which is in my legs. It makes sense once you start turning the bike, but you have to make a great effort to keep the weight off your wrists. What surprised me about the Panigale is that for a thoroughbred it’s extraordinarily easy to ride. The fueling is very smooth and the clutch action easy; and quite contrary to expectations the bike feels completely stable poodling around a parkling lot at crawling speed. It is steady. Throttle response was gentle but precise, and the bike never stopped pulling at any speed, but I rarely got a chance to really push it. I didn’t love the gearbox, but it was a hot day, it had probably had a hammering, and I found neutral only about a third of the occasions I wanted it, and a number of times I didn’t. The brakes were terrific, needing only a very light pull, but not intimidating at all.

The route for the test ride took us on a familiar road which happens to have a sequence of very good corners, so I had at least some basis of comparison. At this point I realised the danger of such a bike; it was so effortless to hold a line that you just want to go faster and faster. Likewise the bike felt so comfortable leaned over that I wondered if it was designed to sleep on its side. Just as I felt like I was starting to get used to it, we had to go back.

After a drink, the world’s most expensive gyro, and some surgery to take the smile off my face, it was time for the Monster. I’ve always liked the Monster, they’re extremely cool, and I was looking forward to trying this one despite feeling it was a lot more engine than I thought I’d ever want. Again, a gorgeous machine in a rather different way to the Panigale; all alloy muscletone and sinewy detail.

I thought it looked pretty chunky, but this is an illusion that completely disappears once you sit on it, where once again it feels as light as a feather, and very, very comfortable. Like a living room chair, albeit one that’s one fire while hurtling through Hades. The heat kicked out by the v-twin on this hot day was brutal, and I would not want to be sitting in commuter traffic in similar conditions.

Once underway, the 1200 wasn’t quite as refined as the Panigale, nor is it meant to be. I needed more time with the bike to get used to the throttle, which was fly-by-wire and smooth enough, but The torque was awesome, and I use that word advisedly. Ever walked a pair of strong dogs and felt they could get away from you if you dropped your guard? That.

I knew the throttle feel was just a matter of familiarity and muscle memory but above all, this thing was fun. I wanted to spend all day on it and ride my favourite roads. Shifting about on the seat was easy, and while the steering wasn’t quite as point-and-click as the Panigale, the bike still made me feel very confident. The nature of the engine made it feel like a scooter on steroids; I just stuck it in third gear and left if there for most of the ride. Twist and bloody well go!

Despite having far more power than I’m familiar with, while neither bike was frightening, this was the most obvious sensation for me. Gearing was less important on the street, but having to watch throttle inputs while at rest and under braking was a new experience; the slightest hiccup could cause a small surge in power. The other surprise was ride quality. Both bikes beat the shit out of my Ninja when dealing with Pittsburgh’s dire city roads. For the Monster I expected this, but the fact the Panigale also managed it was impressive to me. I’d expected a supersport to break my back, whereas it was a bit of a magic carpet. The Ninja, on her skinny tyres feels every little bump.

At the end of the ride, it was time to hop back on the Ninja 300 and go home. Afterward, a friend asked me if I still loved my bike after riding two bikes with far more power and better…well, everything. Conventional wisdom says test rides are usually ruinous for your relationship with your current ride. I think the truth is, you’ll always desire more. Power in particular, is addictive. There are a couple of circumstances where I’ve wanted more grunt out of my bike, and eventually I won’t be happy until I have it.

For the moment, however, the kind of riding I do, my bike is nigh-on perfect. If I had a full weekend with a different bike I may feel differently, but after a forty minute ride, it barely qualifies as a holiday romance.

Last month, I hit the milestone. I’d been managing around one-thousand miles a month since I got the bike; Winter had caused this to slip in January, when I had lost most of that month to bad weather. I knew I’d get back on target when summer came around; and so it came to pass. 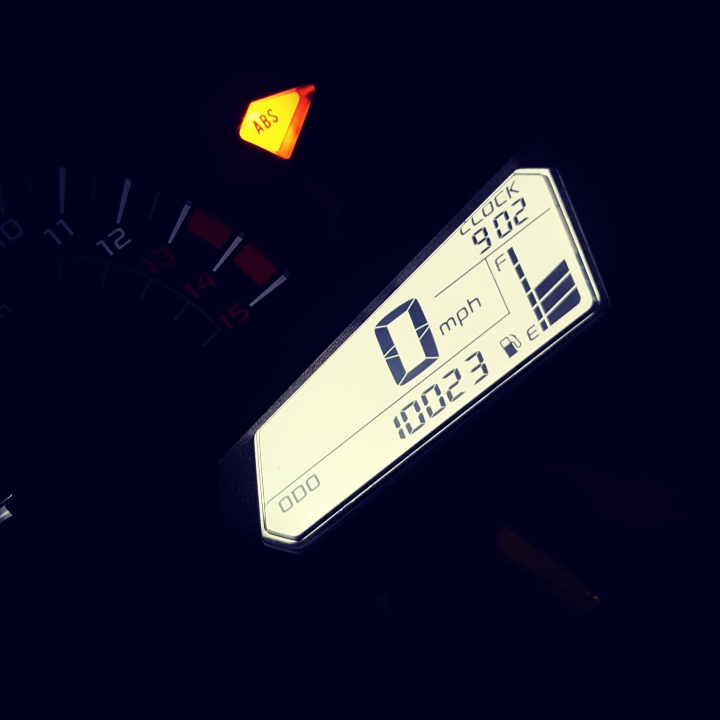 From this year, a number things have stood out:

Quite a bit has changed since my previous blog entry in March. My first full Summer of riding, for starters. It was wonderful. Of course, as much as I love my bike, I want something else now. I’ve been here before. We will see.